The performance of crypto this month has been weak, as BTC pulled back by -28% in the last 30 days of trading, reaching as low as $25.4k USD, at the time of writing. ETH also experienced strong losses up to -36%, and currently trading at $1900 USD per token.

The month had a rough start, as the Federal Reserve confirmed a hawkish bias on the back of lingering inflation during their May 3rd FOMC meeting. Overall markets saw the selling of risk-off assets, with US Equities closing with -3% and crypto blue chips shedding -6% average in losses.

During the first week of the month, P2E saw the worst performance across crypto sectors, followed by Top Assets (large caps) with -9.6% and Web3 with -8.9%. 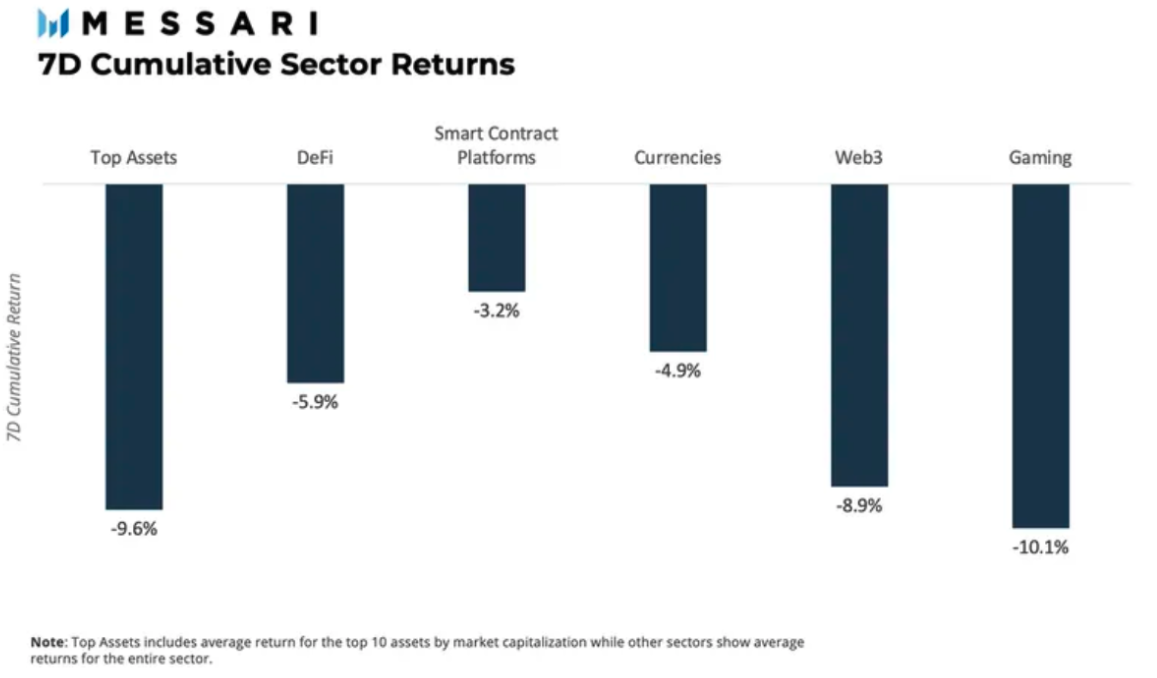 As expected by the market, on May 3rd the Federal Reserve announced that it had voted for a rate hike of 50 basis points for the funds rate. This announcement was on the back of “robust” job gains and a decrease in unemployment, which has led to increases in inflation. Furthermore, the reduction of the balance sheet starting from $47bn per month to upto $95 bn per month after the first three months. According to the Federal Reserve’s later statements, System Open Market Account (SOMA) will reduce its holdings of U.S. agency debt and U.S. agency mortgage-backed securities (MBS).

The narrative was focused on uncertainties regarding macro environment, as Russia’s invasion of Ukraine intensifies and supply-chain issues in China continue to lacklustre growth across the world.

CPI data showed no relief, as it marked 8.3% for the month of April, beating expectations by 20 basis points. April’s mark showed a substantial decrease from the 40 year high reached in March of 8.5%. 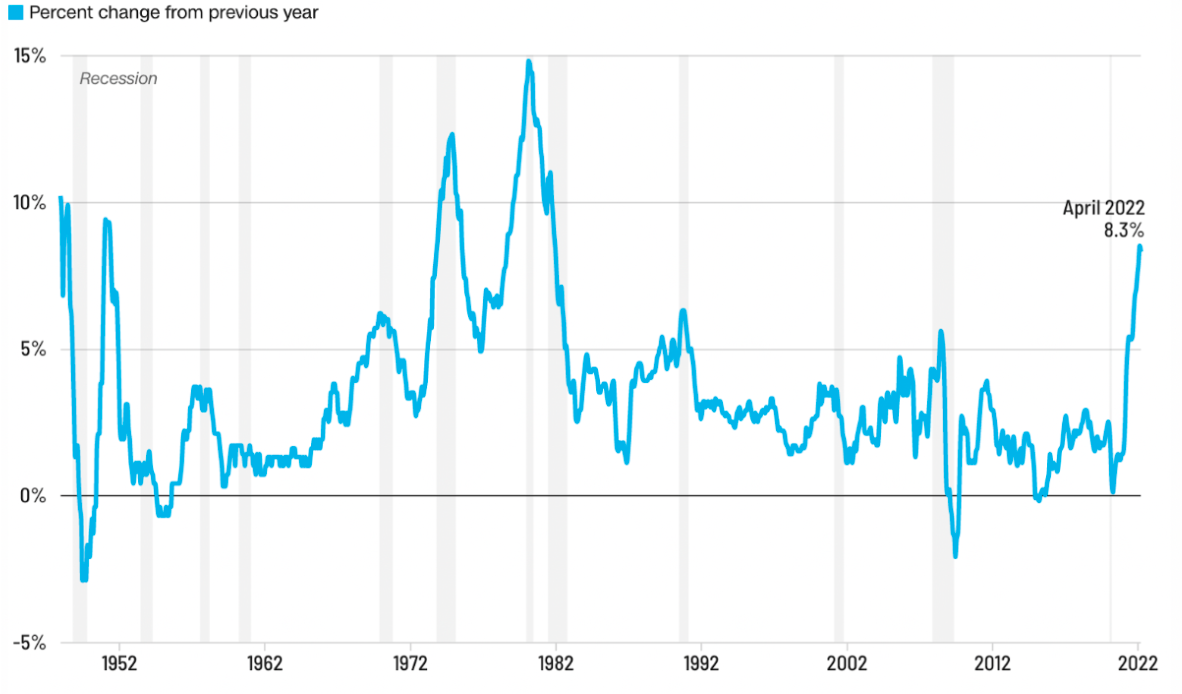 As macro conditions seem to worsen, we take a look at on-chain metrics to better understand price action to provide a clear view on what could come next. There are two areas that we will focus on in this piece; decrease of profitability by long-term holders (and capitulation) and stablecoin supply/demand. 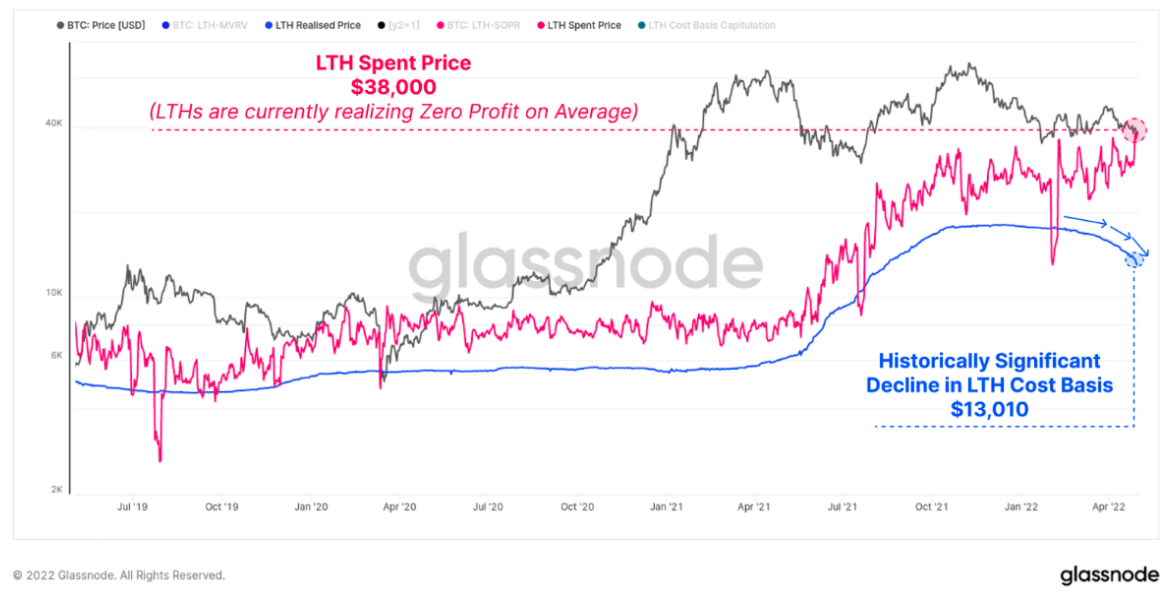 The graph above is the Long-Term Holder Spent Price vs Cost Basis, which depicts capitulation in the market by long term holders. The blue line represents the Long-Term Realized Price, which is the average buying price of all coins that LTHs have. This is declining, as we can see from the graph, meaning LTHs are selling off their coins. The pink line represents the average purchase price of the coins being spent by LTH on that day. As we can see it’s trending higher, meaning that LTH are selling at break-even on average. 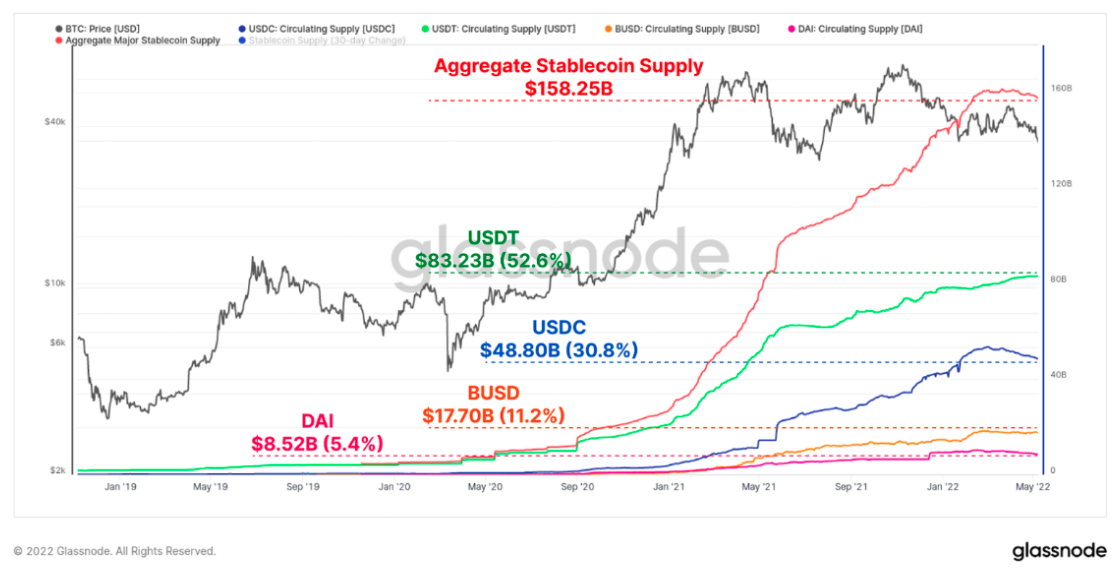 Stablecoins are a key component of the market, as they facilitate entries of new players as well as standardizing a unit of exchange for crypto. By looking at the supply of stablecoins we can know whether or not more participants are entering the market. As seen on the graph above, stablecoin supply grew tremendously during the last bull market due to the increase in demand for crypto and new players entering the market. The supply from major stablecoins went from $5.33 billion to $158.2 billion in less than 3 years. Although, we can notice that the stablecoin supply has reached a flat growth period since March and April 2022. This was led mostly by an increase in redemptions driven by USDC (into fiat). This declined by $4.77 bn since the start of March despite an increase of $2.50 bn by USDT in the same period.

Further on stablecoins, above we can see the 30-day change in aggregate stablecoin Supply vs the Contribution by USDC. As discussed before, USDC has seen a supply contraction by a rate of -$2.9bn per month, which can be identified in the bottom right corner of the graph by the dashed red circle. Being one of the most widely used stablecoins, USDC supply contractions indicates a move of money from stablecoins as a whole back to fiat. More significantly, this indicates a risk-off sentiment as well as weakness in the crypto market overall.

LUNA & Do Kwon, the Man Who Flew Too Close to the Sun

In this piece we would like to go over the rise and collapse of UST, one of the largest stablecoins to have ever been created, the Terra ecosystem, and the domino effect that impacted the markets. UST was an undercollateralized algo-stablecoin of the Terra ecosystem that was created and sponsored by the Luna Foundation Guard led by Do Kwon.

The way UST and LUNA worked in the Terra ecosystem is that UST would keep a value close to 1 USD, meaning that it was be pegged to the dollar. In order to do this, it implemented a two token system where the UST and LUNA supply should remain similar and both tokens are redeemable between themselves. If the price of UST exceeds $1, traders are incentivized to burn LUNA in exchange for one dollar worth of UST, which increases its supply and theoretically will eventually drop the price back to $1.

Anchor, a DeFi staking protocol within the Terra ecosystem, was offering “saving account” deals for users to stake their UST, which was paying a whopping 20% APY. Anchor generated this yield by borrowing and lending UST to other users for collateral. A large sum of this collateral was LUNA.

So what went wrong?

Due to its early success, the Terra ecosystem grew enormously and had one of the largest market capitalizations of $40bn. LFG, along with Do Kwon, began to think of ways to improve the backing of UST. Thus, they decided to back part of their reserves with large cap crypto currencies such as BTC and AVAX among others tokens, making UST a multi-collateralized algo-token. Having done that, the stability of UST peg became inherently correlated with the value of the collateral in its reserves. 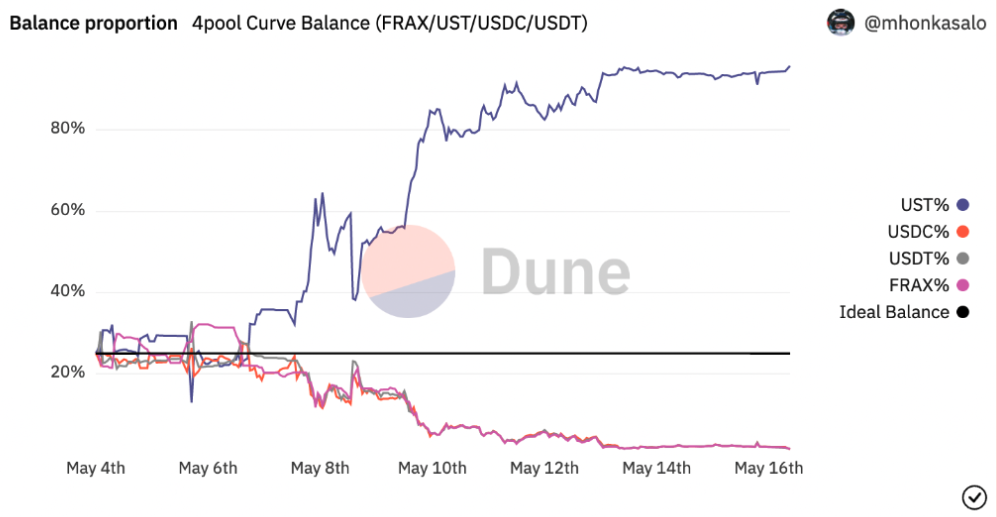 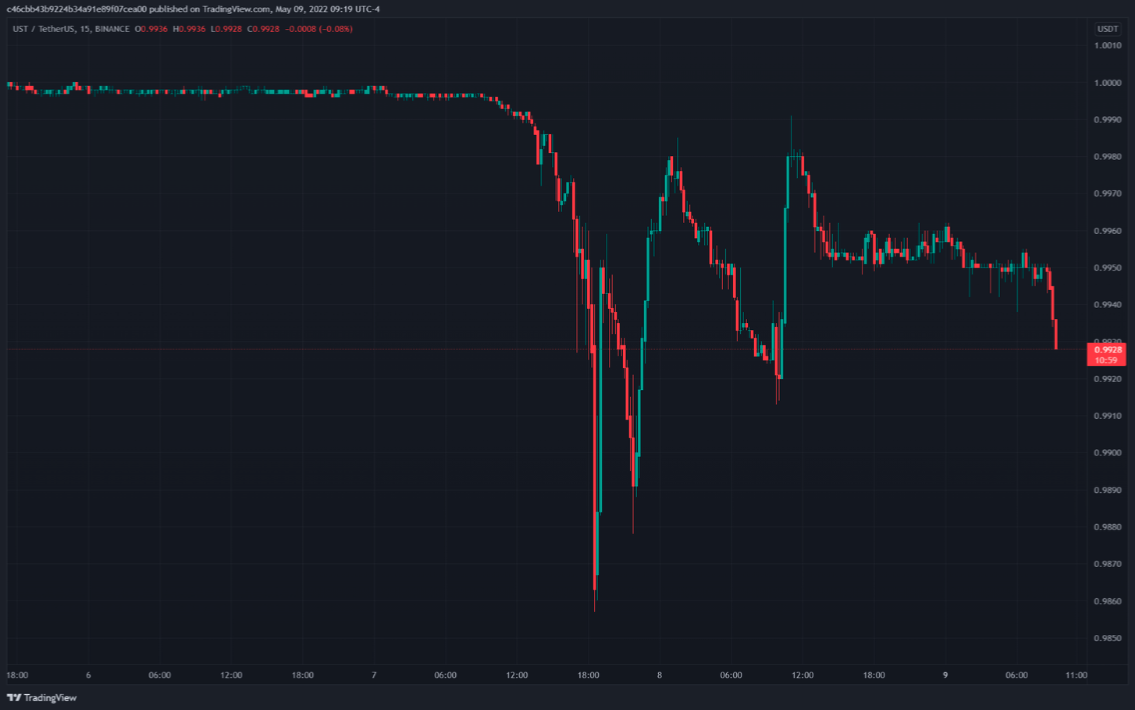 On May 8th, 2022, 4pool Curve, one of the largest stablecoins pools in the world,  saw an increase in UST supply by 60%, as seen below. An $85 million UST-to-USDC swap had the pool slightly out of imbalance, however, big players came in and by selling ETH in the market, bought back the UST and managed to repeg closer to 1. We can see that the balance of the pool went temporarily to previous levels and the peg was temporarily saved.

However, on May 9th, we see that a similar situation occurred when another massive sell of UST was executed on Curve pool, pushing the imbalance to above 80% of UST in the pool and the peg below 0.99, reaching the 0.60 at some point. The overall crypto market entered into a panic and the collateral held by LFG became less valuable as a downward spiral. This impacted the value of LUNA, as it’s supposed to be continuously sold to keep the peg. This was the beginning of the end, as the peg never went above 0.8. The value of LUNA nose dived by over 99% and currently sits at $0.00026 USD. 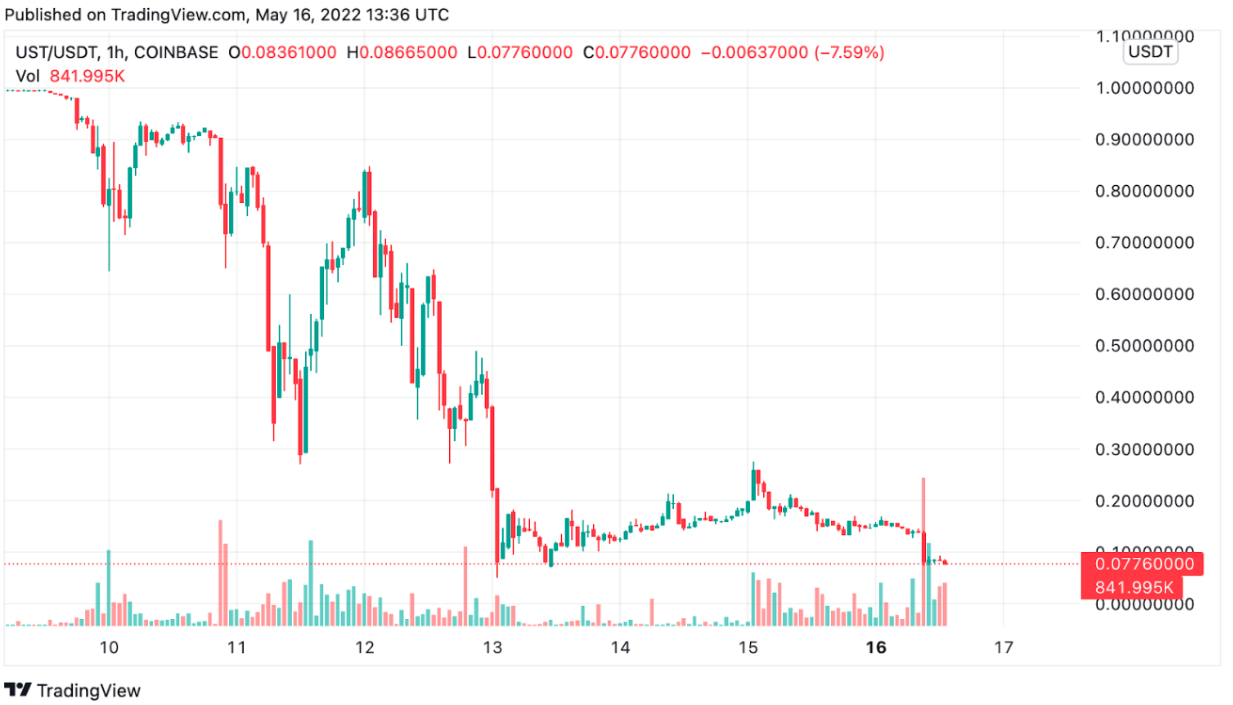 A lot of questions are still unanswered from the Terra/Luna episode, ie: who was responsible for the massive selling of UST on Curve? Was this an orchestrated “attack” to depeg UST? Why didn’t LFG come up with a contingency plan to stop the devaluation of LUNA and UST? Why was the process of restabilization of the token so manually done by the foundation and Do Kwon? Are BTC collateralized tokens safe in highly correlated scenarios?

We are yet to see the aftermath of this black chapter in crypto history, as Terra ecosystem and UST are mostly marketed towards retail money. We may well see retaliation from regulators towards stable tokens and crypto overall. One thing we must remember from this is that crypto is still an immature market and being the decentralized, crowdsourced environment that it is, comes with trial and error. Thus, we should always keep in mind that every investment has its risks and doing your own research continues to be the best source of alpha in the market.

PrevPreviousHow to Send SLP Tokens to Your CoinFLEX Account

Crypto market performance The performance of crypto this month has been weak, as BTC pulled back by -28% in the last 30 days of trading, reaching as low as $25.4k USD, at the time of writing. ETH also experienced strong losses up to -36%, and currently trading at $1900 USD…
Read Post

How to Send SLP Tokens to Your CoinFLEX Account

Step 1: Log in to your CoinFLEX Account and go to the deposit page.     Step 2: Select the coin you wish to deposit and copy the SLP network address under the QR code. Make sure you have selected the correct address.     Step 3: Head to the…
Read Post

Dear FLEXers, As the majority of our token activity is moving from SLP (Simple Ledger Protocol) to SmartBCH and other networks, allowing for more efficient and full interest distribution (e.g. no 10 flexUSD minimum address balance requirement), CoinFLEX will be deprecating support for SLP completely. All holders of CoinFLEX-issued SLP…
Read Post